Great Wood Tables -- An Average Little Table with Some Surprises

Continuing with my favorite wood tables, I want to show you this neat little piece.  This is a charming nineteenth century country French table in oak that takes its design cues directly from the seventeenth century.  I love the sturdy turned legs that begin below the block with inverted spools followed by a trumpet turn that is begun with two scribed lines and finishes with a great flurry of turns and a block before quietly ending at a simple bun foot.  Those supporting timbers at the bottom would really be more appropriately termed “rails” rather than stretchers as they really are substantial enough to rest ones foot on without doing damage.  The feature that first drew my attention to this table, however, is the chamfered corners of the table top.  The table is distinctly geometrical and heavy – almost to the point of boredom, but the neatly clipped corners relieve this and add enormous interest to the piece. 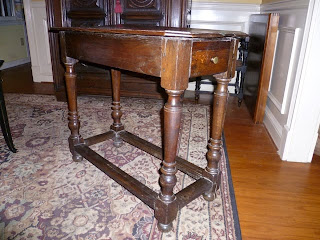 The leg design on this table, by the way, is not necessarily unusual but it is more typically seen on a much larger table.  And this is the second point that drew me to this table.  The elements – the sturdy legs and heftier-than-necessary rails – imply support for a larger table but this is a relatively diminutive table.  It slips in very admirably as a sofa end table.  When I am admiring it, I often wonder just what its original purpose would have been.  The craftsmanship is competent but nothing exceptional; at a century and a half of age it is not loose or wobbly but the mortise and tenon joints are secured with undisguised pegs.  This is a nice, homey thing to see but not the hallmark of fine cabinetwork so I assume a village cabinetmaker or talented rural amateur with a reputation for building sturdy kitchen or dining tables was asked to create this custom size.  That would explain the heavier than necessary legs and rails.  It is not a table that was consistently loved: when I bought the table it was rather filthy but what you see is the original finish after years of gentle cleaning, waxing and polishing.

I’ve never seen another table in this country style that is proportioned quite like this - and I have looked a great deal.  A very good dealer in this sort of thing -- L'esprit (see item #36045) -- has a table that is similarly dimensioned but without the chamfered corners and with an even heavier rail priced at $1,600.  I'm sure their table is worth that but I really prefer mine.  I always enjoy seeing it and admiring its little cut corners and oblong proportion.  And in a modern interior it adds a great deal more interest than a brand new table would be able to offer.  It has no style name to describe this – the best effort would be that it is a country French vernacular table of the middle to late nineteenth century.  But the wood, the dark finish and the overall weighty feeling is generally associated with Normandy – although it really could be from any rural region of France – or even Belgium for that matter.   In some ways, this table sort of reminds me of a mixed-breed dog; stronger and better put together than its pedigreed counterparts, it has one or two features that more than compensate for its otherwise ordinary and clunky appearance.  And it has endured in spite of the fact that it has not been particularly cared for – you have to love a survivor.
Posted by Timothy Revis at 6:03 AM